Top 8 Neighborhoods in Bellevue WA: Where to Live in 2022 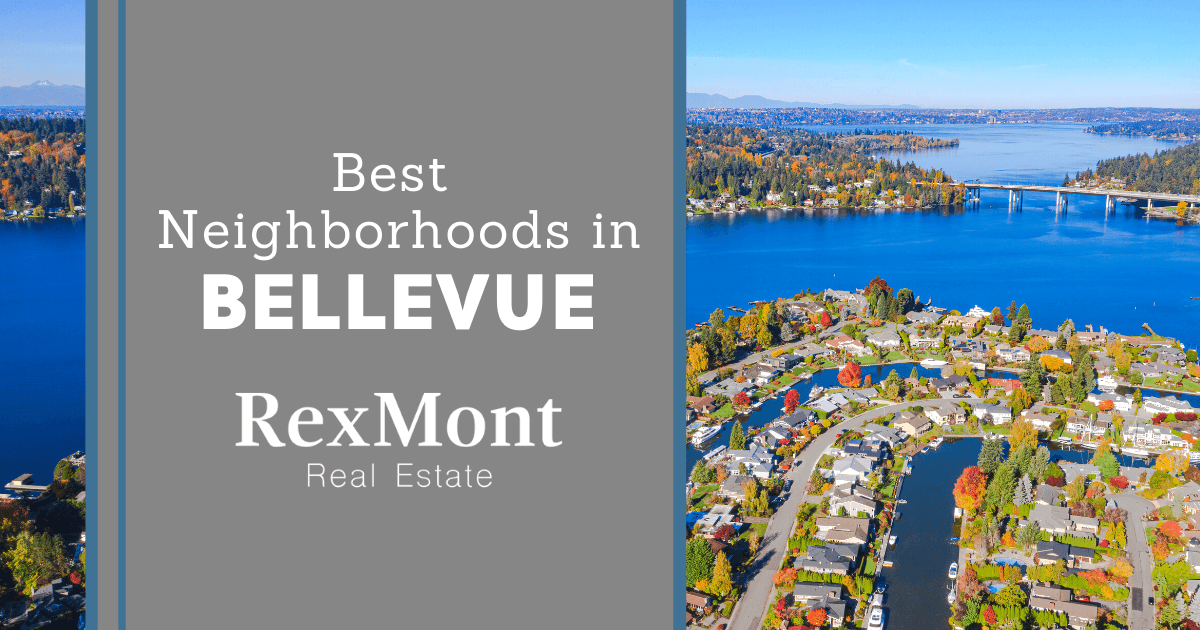 Some may look at the city of Bellevue, Washington, and only see a Seattle suburb. However, look a little closer, and would-be homeowners will find a vibrant community filled with plentiful parks and nature, abundant shopping and dining, and so much more. But with so many neighborhoods, which ones are the right choices for new residents? Keep reading to discover eight of the best neighborhoods in Bellevue, WA, and take a look at the advantages each provides.

Located on the southern end of Bellevue, Somerset is a hilly, tree-lined suburban neighborhood with a strong sense of community. The community consists of more than 1,200 homes spread across more than 20 smaller subdivisions built in the 1960s and 1970s. It's also a great neighborhood for those who love to get outside. Somerset residents can join the Somerset Recreation Club, home to a community clubhouse, pool, tennis courts, and other facilities. The area is home to the Somerset Greenbelt, six acres of trails that connect to other local and regional trails. Residents can also enjoy the nearby Coal Creek Natural Area and Cougar Mountain Regional Wildland Park, with 35 miles of trails and incredible views of the local scenery. In addition to these gorgeous natural surroundings, Somerset is located just a short drive from Interstates 90 and 405, allowing easy and fast access both north-south and east-west through the region.

Somerset homes for sale consist entirely of single-family homes constructed in a wide variety of architectural styles. They tend to have four to five bedrooms and three to four bathrooms, spread over 2,600 to more than 4,000 square feet of living space. Homes generally start upwards of $1.5 million and can easily reach close to $3 million.

Bridle Trails is a high-end north Bellevue neighborhood that takes its name from the nearby Bridle Trails state park. Bridle Trails State Park is known as one of the top equestrian parks on the west coast and includes 28 miles of trails over nearly 500 acres. The park also hosts numerous cultural events and other entertainment, providing a wonderful gathering space for residents. The community is also adjacent to the Microsoft campus along State Route 520, providing lightning-fast access to one of the region's top employers. Homeowners are also just minutes away from plentiful shopping and dining options in Bellevue and only a short drive from all that Seattle offers. Proximity to Interstate 405 also makes trips north and south through the region a breeze.

The beautiful homes in Bridle Trails typically start north of $2 million, though some can be found more affordably. However, it's not uncommon to see them sell for up to $5 million in some cases. They generally include three to six bedrooms and as many as five and a half bathrooms. With homes up to nearly 7,000 square feet of living space, Bridle Trails offers some of the most spacious homes in the area. Owners also enjoy large lots of almost a full acre.

Often looked at together with the nearby Robinswood community, Lake Hills is another top Bellevue neighborhood. Just a short drive from the downtown Bellevue neighborhood and the Interstate 90 and 405 junction and close to State Route 520, Lake Hills is ideally located for both getting around locally and traveling through the entire Seattle metro region. It's also home to the scenic Lake Hills Greenbelt, which includes 150 acres of forests, wetlands, streams, and lakes, and only minutes from gorgeous Lake Sammamish and all the fun the water can provide. Lake Hills is also the location of the public Bellevue College, providing a variety of educational opportunities.

Lake Hills homes generally sell in the $1.25–$2 million range. However, some luxury homes in the area have sold for as much as $3 million, and occasional homes are available in the high six figures. Most Lake Hills homes are modestly sized, with three to five bedrooms and one-and-a-half to three bathrooms. While most have between 1,800 and 2,500 square feet of living space, some can have as little as 1,200.

Those looking for a unique community on the water may find their new home in Newport Shores. Located on the shore of Lake Washington, it includes more than 340 homes, nearly a third of which have direct waterfront or canal access. The 170-acre waterfront community is rich in amenities, primarily through the Newport Yacht Club. This members-only neighborhood facility includes a marina with more than 100 slips, a heated pool, sports courts, and event space. While residents enjoy a quiet, secluded lifestyle at home, Newport Shores is ideally located close to the interchange of Interstates 90 and 405, allowing easy access to the city of Seattle and other parts of the region. Plus, downtown Bellevue's shopping and dining are only minutes away.

Waterfront homes often come at a premium, and Newport Shores is no exception. Homes in Newport Shores typically start north of $2 million. However, those directly on Lake Washington can easily sell for $6–$7 million or more. For their money, homeowners will find some of the area's largest homes, with as many as five to seven bedrooms and a similar number of bathrooms, spread over 2,500 to 7,500 square feet of living space. It's among Bellevue's best luxury communities, and it's easy to see why.

Located along the south side of Interstate 90, Eastgate is a perfect choice for those who need to commute to Seattle daily. With just a 10-mile direct drive, residents travel from home to the heart of downtown and all the dining, nightlife, and other big-city attractions. Closer to home, there's also a wide variety of everyday shopping and restaurant choices along the area freeways. These include the Marketplace at Factoria, which is home to popular stores like Target, Nike, and Nordstrom, as well as the Eastgate Plaza with groceries and daily needs. Those who love the outdoors will also be able to take advantage of nearby Lake Sammamish, which offers recreation opportunities on land and water.

Eastgate's homes were primarily built in the post-World War II era, though others were constructed between 1970 and 2000. They usually start around $1 million, though some homes can sell in the $2–$3 million range. These three- to five-bedroom homes provide 2,500–4,000 square feet or more of living space in a diverse selection of architectural styles, from old-school ranches to modernist new construction.

Another top Bellevue community located on Lake Washington, Beaux Arts Village is technically its own independent city, despite its proximity to downtown Bellevue. Founded in 1908, this waterfront hamlet is home to about 300 residents but enjoys full police, fire, and other emergency services through agreements with neighboring municipalities. Neighbors get to know one another with custom name sign plates on each property, fostering a tight-knit sense of community. It's a highly sought-after neighborhood thanks to easy access not only to Bellevue's best areas but also to Seattle, thanks to Interstate 90, located just to the south. Residents also enjoy amenities like a private Lake Washington beach and quiet, tree-lined streets.

Those looking for a cookie-cutter home should look elsewhere, as Beaux Arts Village contains an unusual and eclectic mix of new construction homes and old homes in a variety of styles. They typically include three to four bedrooms and two to three-and-a-half bathrooms, spread over 2,000 to nearly 3,600 square feet of living space. Becoming a "villager" (as community members often refer to themselves) and buying a home in Beaux Arts Village will generally cost at least $1.7 million, or as much as the $4 million range.

Woodridge is a variegated community of homes located along the eastern edge of Interstate 405 and the northern edge of Interstate 90. For many, this makes the neighborhood ideally situated no matter where residents need to travel to in the Seattle metro region or beyond. The subdivision was built in the 1950s through the 1970s, though many homes have been significantly updated or expanded since. Woodridge also shares the 150-acre Kelsey Creek Park with the adjacent Wilburton neighborhood. The park offers historic buildings, farm animals, and a variety of educational programs, in addition to green space and hiking and jogging trails.

Woodridge is among the few top Bellevue neighborhoods to offer condominium and townhome living, in addition to single-family detached homes. This provides options from the low $400,000s to just over half a million for condos that are typically two bedrooms and one to two baths. Single-family homes in Woodridge generally include three to five bedrooms and a similar number of bathrooms, totaling approximately 2,000–3,300 square feet. As might be expected, these will cost more, typically starting around $1 million and sometimes exceeding $2 million.

There are few better choices for those who want to experience the best that Bellevue has to offer than the centrally located Wilburton neighborhood. It began in the 1890s as a logging camp before being annexed by Bellevue as the city expanded in the late 1960s. These days, residents enjoy quick and easy access to all of the shopping, dining, and services that downtown Bellevue has to offer, located just across Interstate 405. The community is also filled with many parks and green spaces, including the Bellevue Botanical Gardens and Wilburton Hill Park. Homeowners can also take advantage of a wide variety of businesses along Interstate 405, from fun like Dave and Busters to more practical spots like Home Depot and Whole Foods.

Like neighboring Woodridge, Wilburton offers potential homebuyers a choice between single-family detached homes and condo or townhome living. These smaller multifamily units usually start from just under $300,000 to the mid-$400,000s, generally offering one to two bedrooms and a similar number of bathrooms. On the flip side, those looking to buy a single-family home in Wilburton should expect to pay at least $1 million, or potentially double that! These three to five-bedroom houses include a good deal of new construction.

Bellevue may look like a small town or bedroom community for Seattle. But as these diverse and desirable neighborhoods show, it's anything but. From luxury waterfront houses to more modest starter homes, Bellevue's best communities have something for every buyer and every taste. With incredible parks and outdoor recreation opportunities, easy access to multiple interstates and highways, and a thriving community, Bellevue is undoubtedly worth a look for anyone considering buying a home in the Seattle metro area.