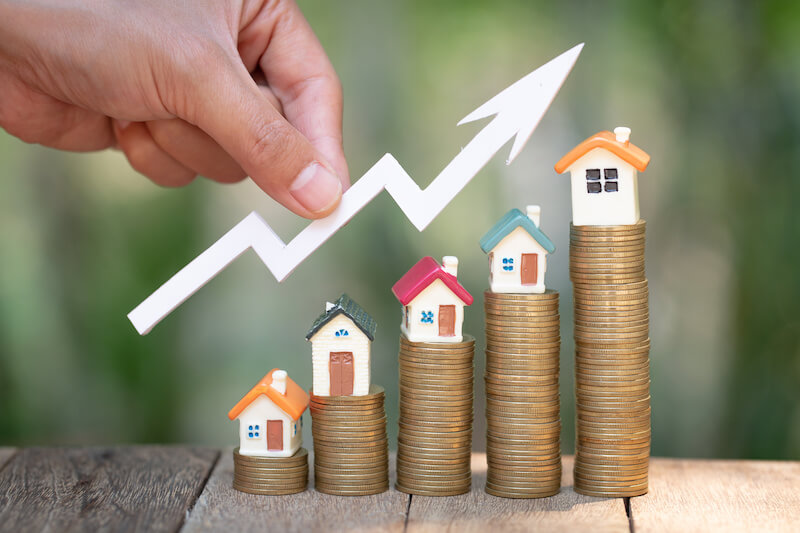 For informational purposes only. Always consult with a licensed real estate professional before proceeding with any real estate transaction. 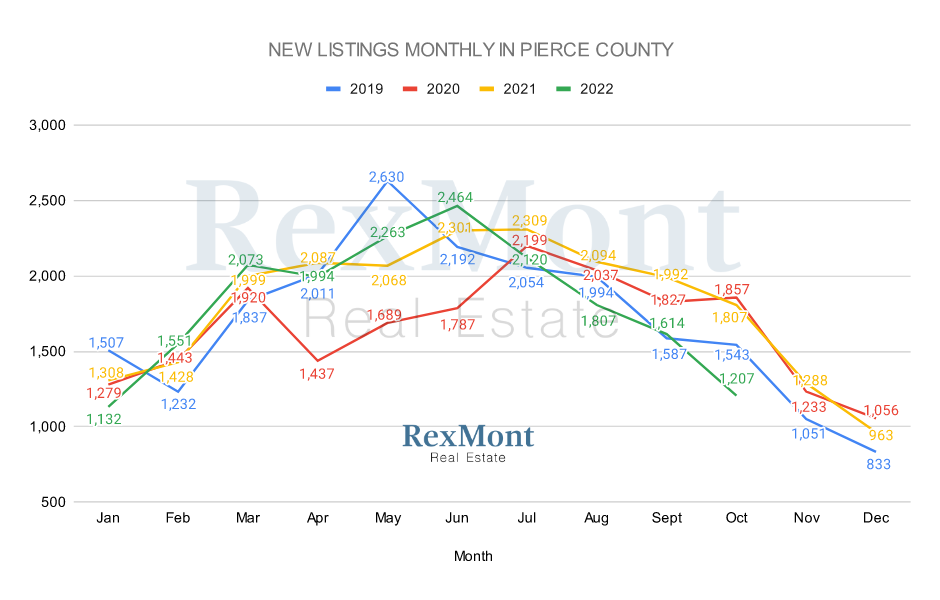 The number of properties listed in Pierce County this year began the lowest it’s been since before 2019, but it steadily increased until March. It hit its peak in June after a slight dip in April, and has steadily decreased throughout rest of the year to October. As mortgage rates affect buyer affordability, we may see listings stay on the market for a bit longer as the year unfolds. 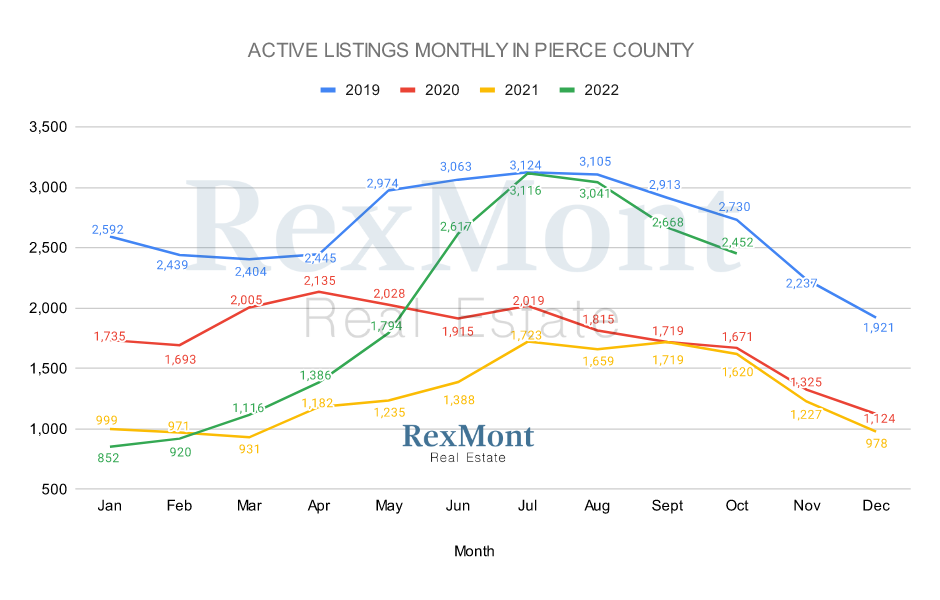 Active listings started lower  than they had been since 2019 but rose throughout the year until hitting a peak in June. The months leading up to October have fallen gradually, in line with previous years. 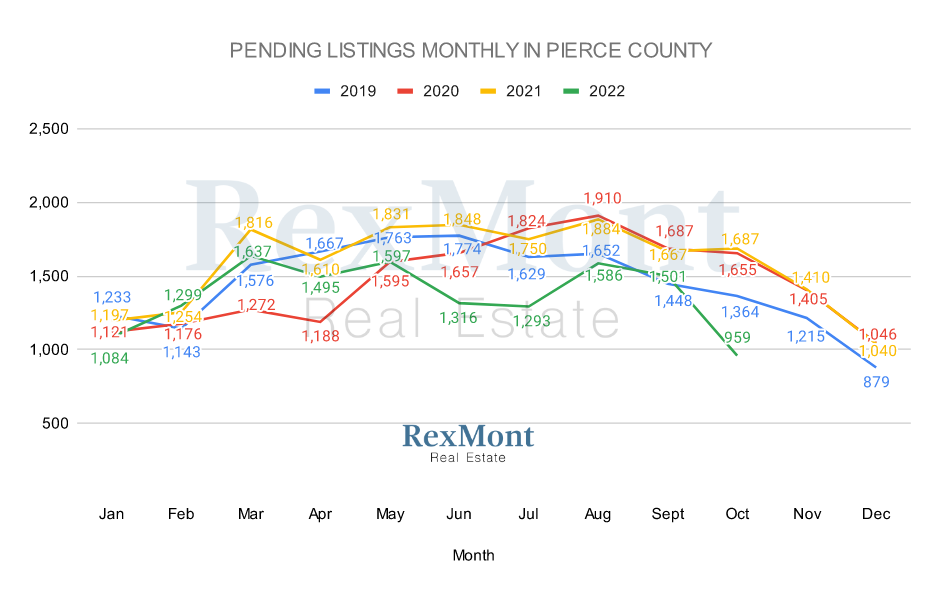 2022 saw plenty of rises and falls throughout the year due to rising interest rates affecting affordability. The year peaked first in March, then again in May and August, though those months didn’t quite reach the height of the first peak. October has fallen fairly significantly compared to previous years. 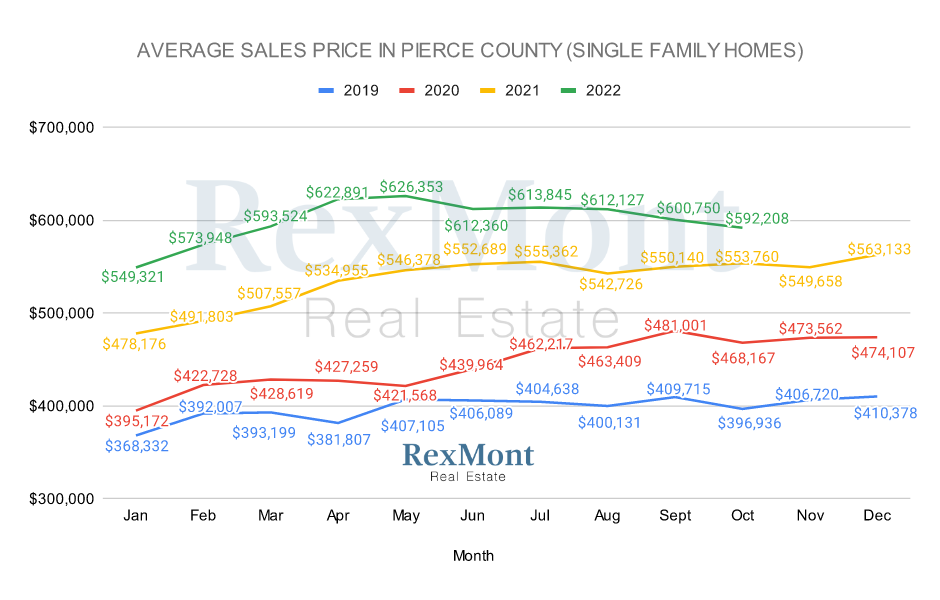 From January through June of this year, sales saw steady increases before falling in July. August had a slight reprieve from the downward trend, but it continued in both September and October. This pattern can be attributed in part to rising interest rates. 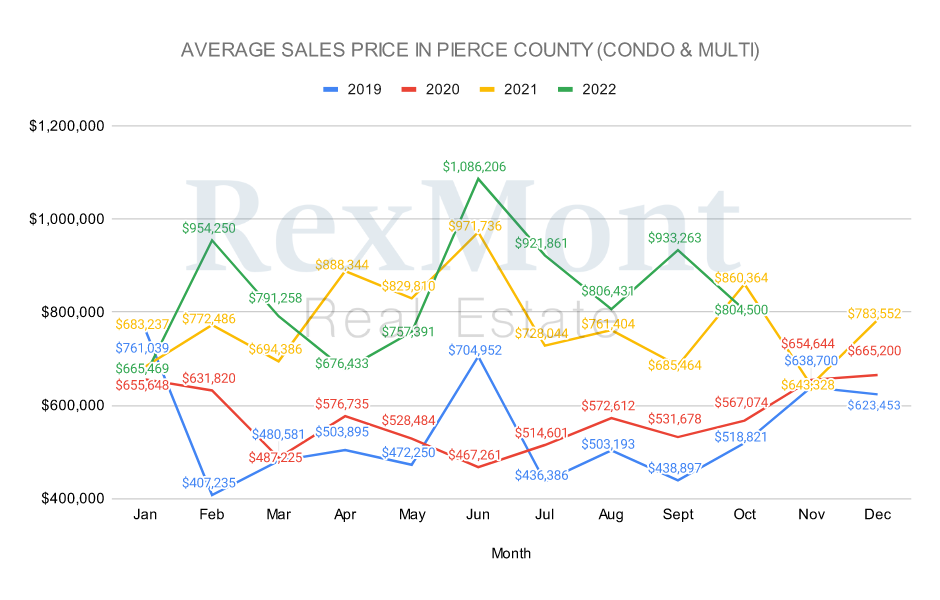 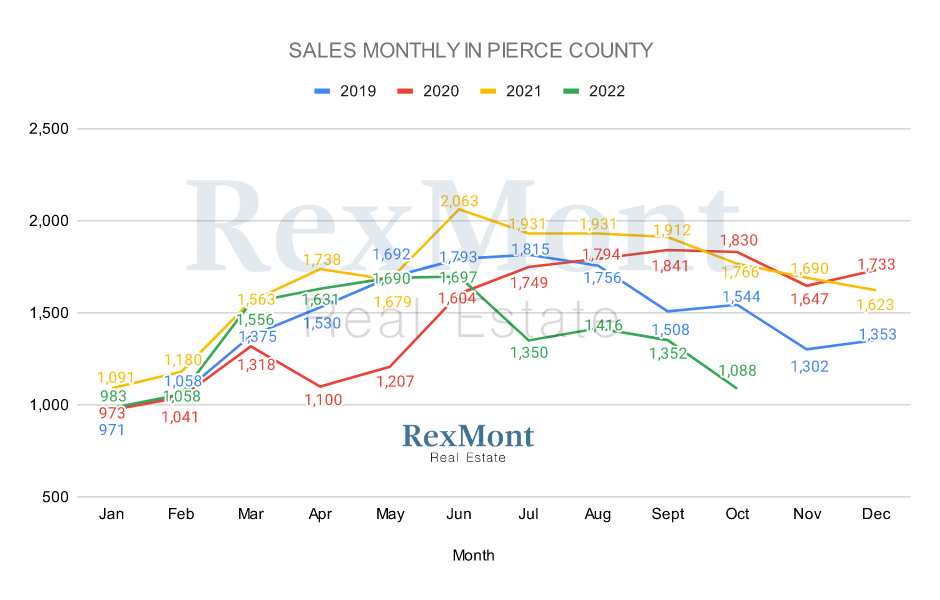 2022 has seen a lot of ups and downs in terms of the multi-family housing market. After being up in September, October did see a substantial decrease. How does this bode for the remainder of the year? We’ll have to wait and see in our next market update.

The data in this report reflects a snapshot of the Pierce County housing market as it exists today. If you are thinking of buying or selling a home in Pierce County, please contact RexMont Real Estate for more information and to discuss your specific needs. We would be happy to help!

Here is update for Pierce County in October 2022. 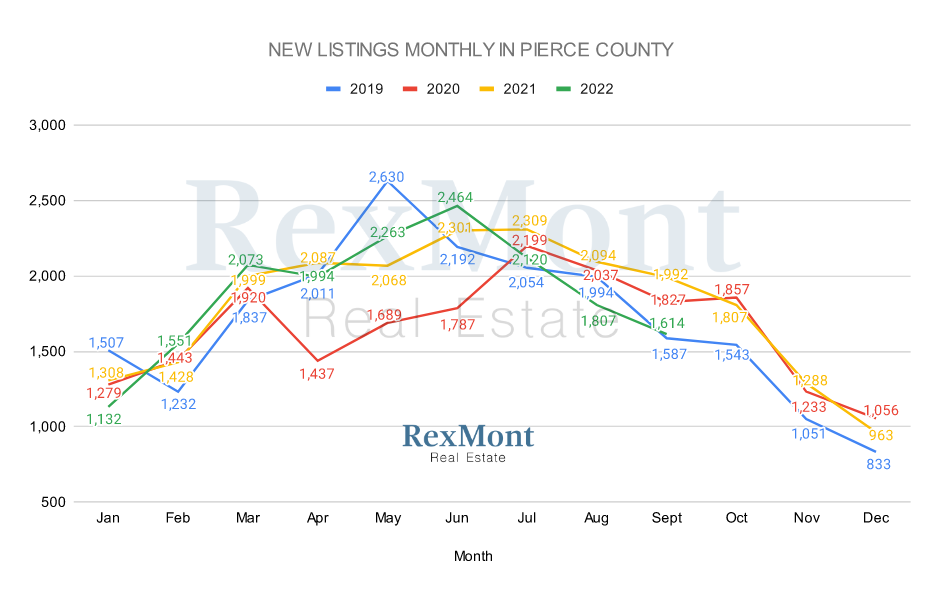 As illustrated, the number of homes listed in Pierce County this year began lower in January and went up until March. It reached its peak in June, but we can see that numbers have decreased steadily since July. Despite this, homes that get listed often don’t last long as buyers are ready to pounce on listings as soon as they’re published. As mortgage rates impact buyer affordability, we may see listings linger on the market through the rest of the year. 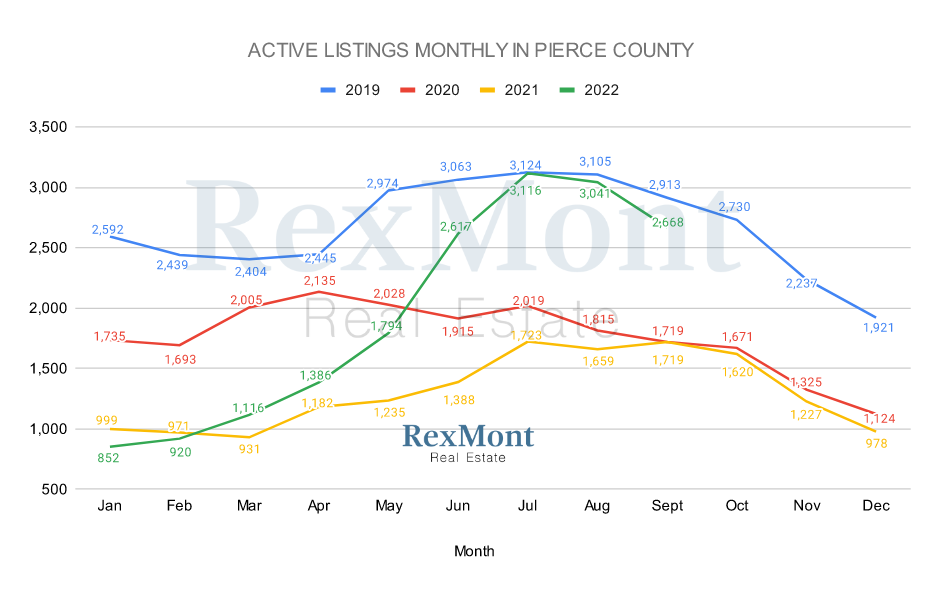 2022 started with historically low inventory but increased throughout the year until peaking in July. August saw the first decline in active listings, and September followed suit.

The number of Pierce County listings peaked in March and saw a pattern of ups and downs throughout the year after that. Since hitting a high in August, numbers fell in September, but not as dramatically as we’ve seen previously. 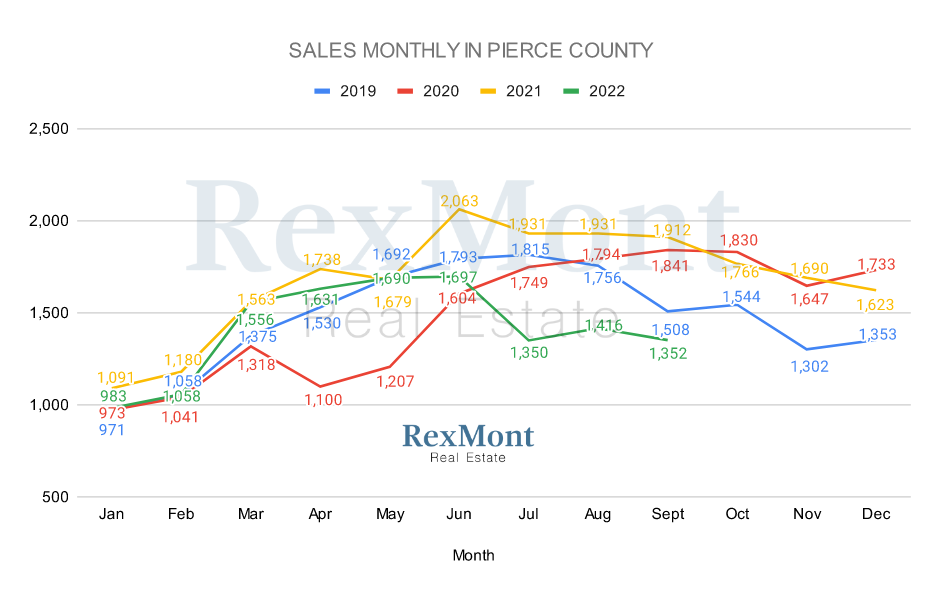 At the beginning of the year, sales numbers in Pierce County were trending upwards from January through June. However, they trended downwards in July before increasing slightly in August. September saw another decrease, which may set the course for the rest of the year as mortgage rates increase. 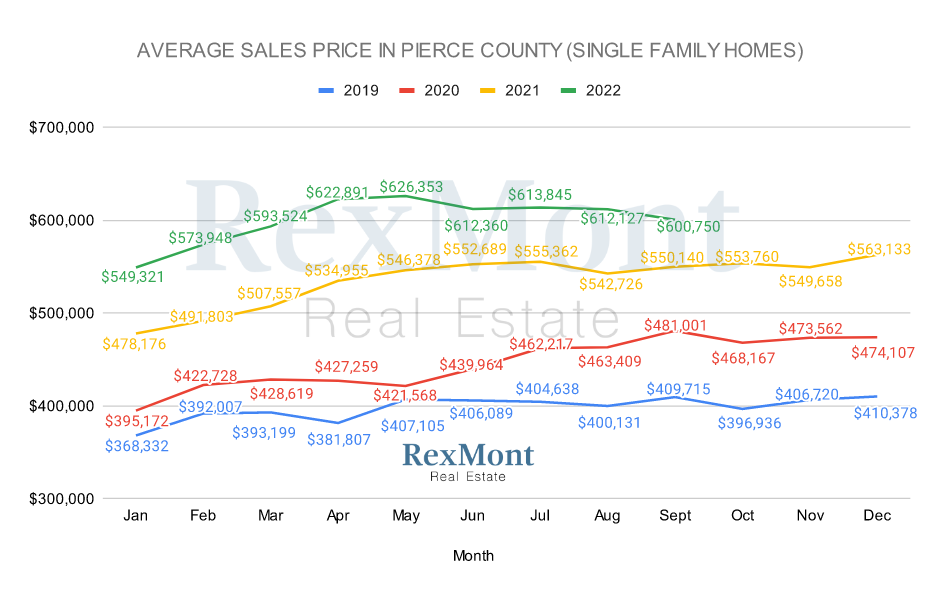 Single-family home prices in Pierce County started off high and climbed through the year until peaking in May. Since then, prices have gradually fallen, though they are still significantly higher than in January. 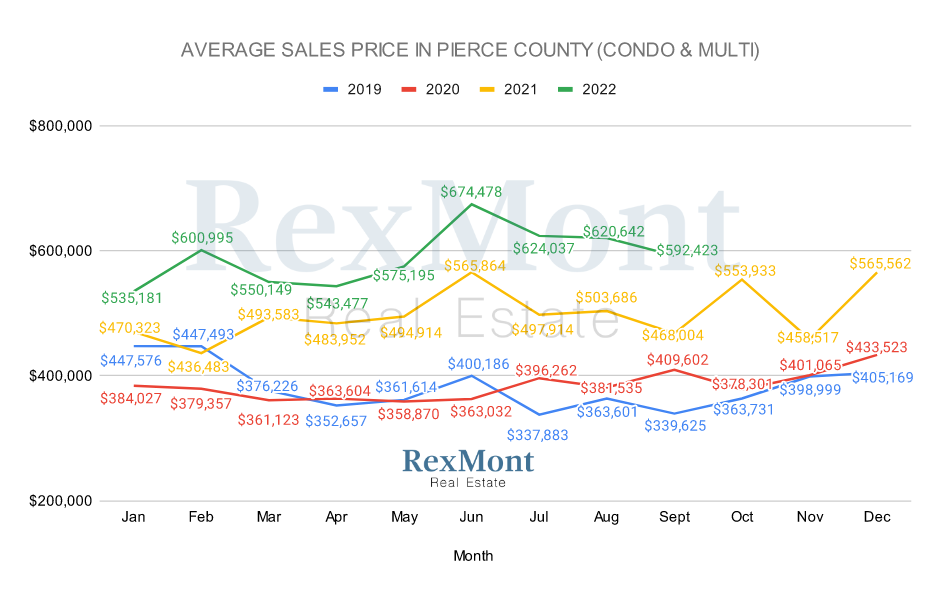 Multi-family home prices in Pierce County have seen more up-and-down movement throughout 2022 than single-family homes. While prices peaked in June, they slowly fell through the following months to September.

Looking for the latest market update for Pierce County, WA? You've come to the right place! In this blog post, we'll provide an overview of what's been happening in the real estate market lately and what to expect in the near future. Whether you're a home buyer or seller, it's important to stay up-to-date on the latest trends and changes in order to make informed decisions, especially as the market changes. 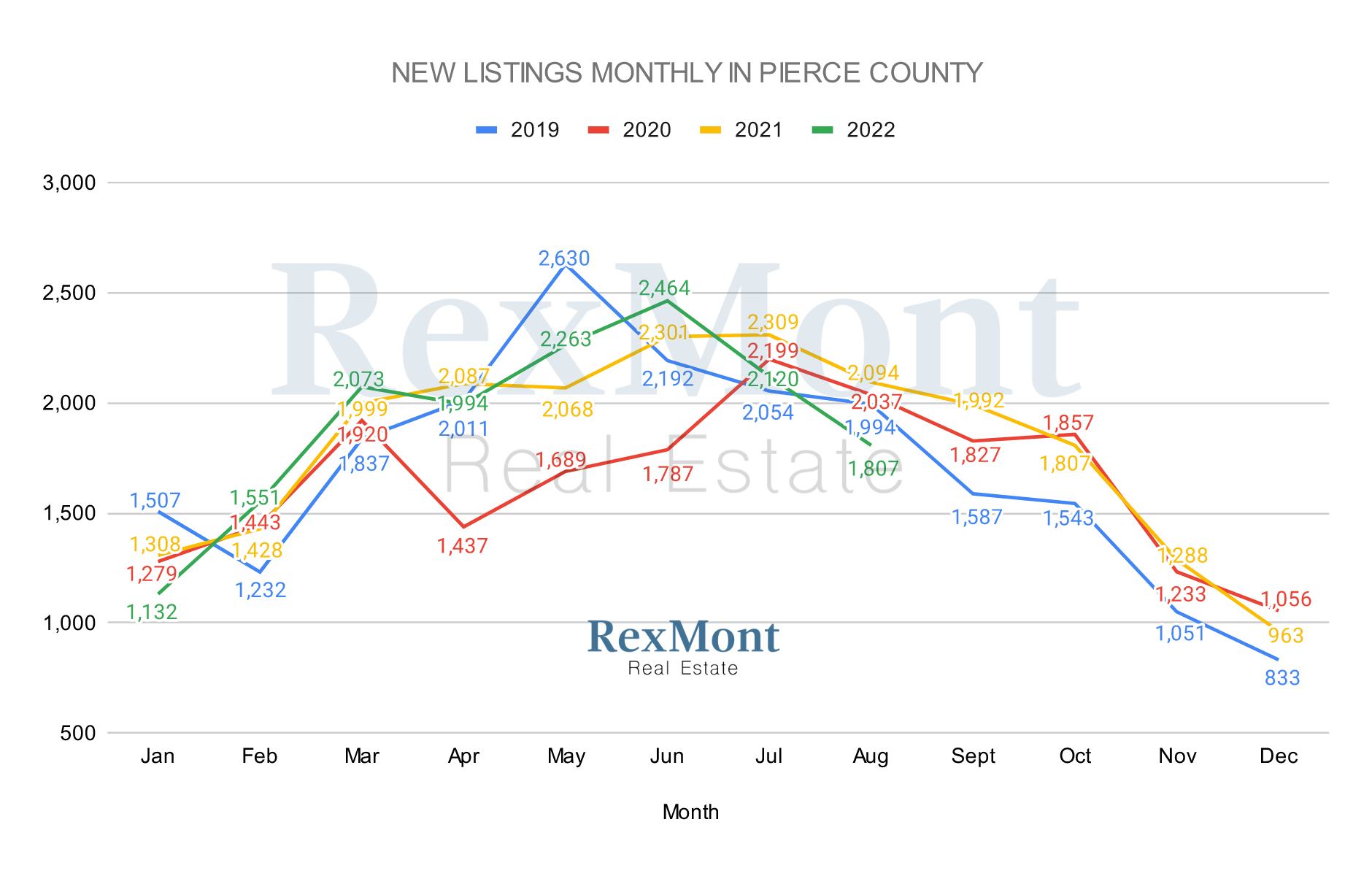 As illustrated, the number of homes listed in Pierce County this year began lower at January and constantly went up until March.

It reached its highest as of now on June, but we can see that it went down this July-August. Homes that do get listed haven’t remained on the market for long with anxious buyers jumping on listings as soon as they hit the market. As buyer affordability is impacted by mortgage rates, we may see listings linger a little longer on the market as the year progresses. 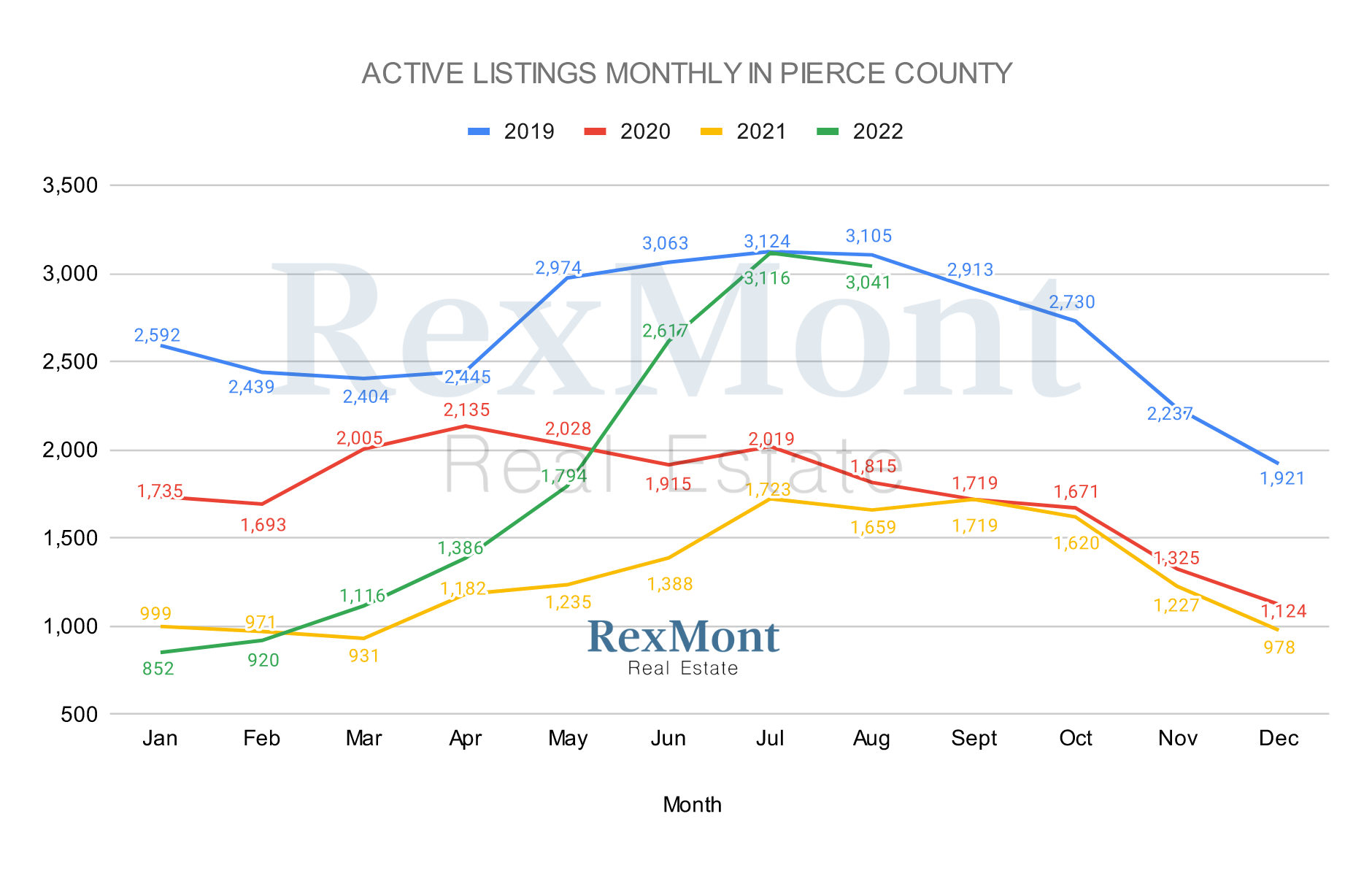 The graph illustrates monthly active inventory in Pierce County in 2022. It has shown historically low inventory but has started going up until July 2022 and is expected to continue in this direction as the year progresses. But it went a bit down on August. 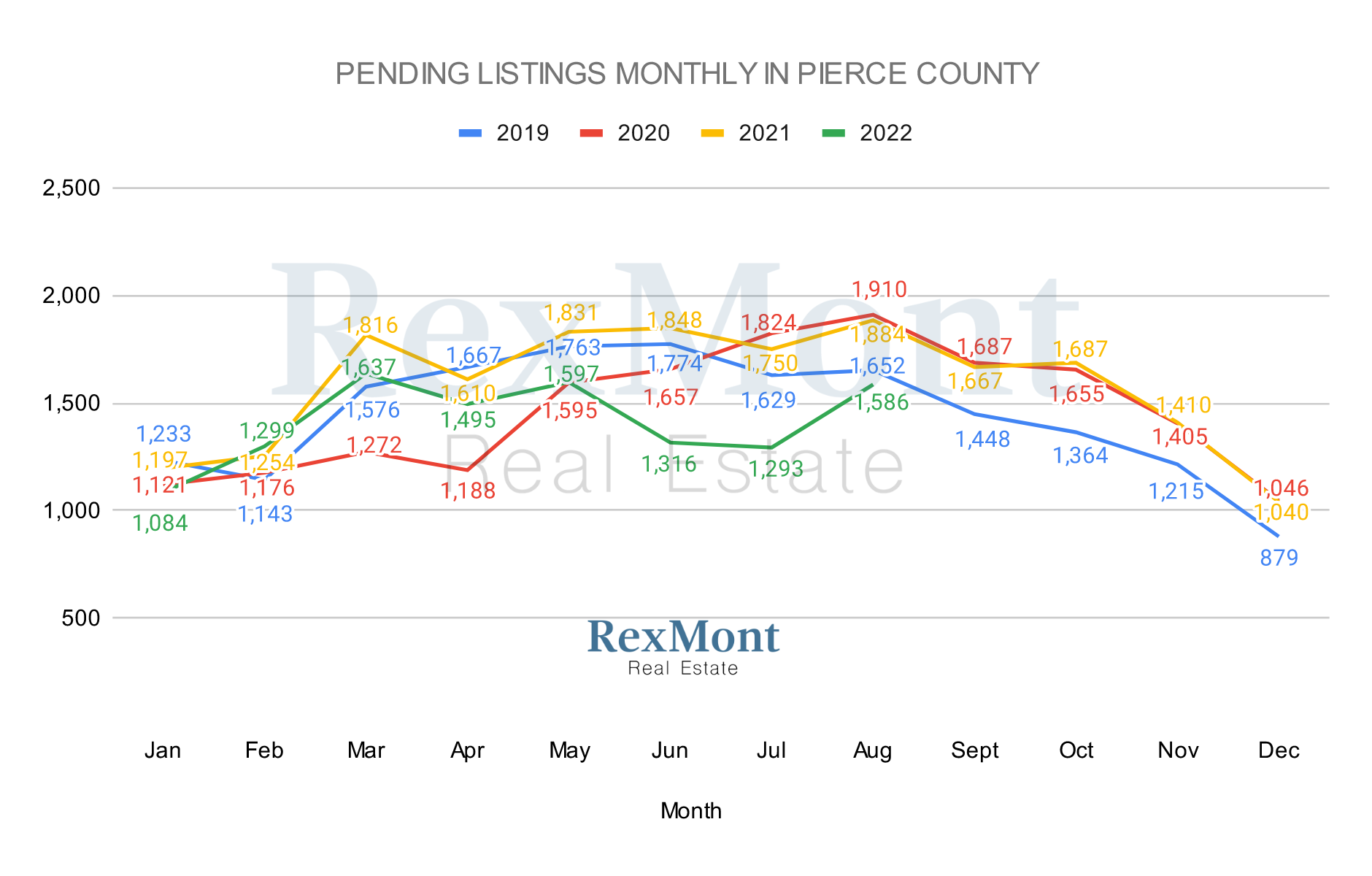 So far in 2022, we can see that there's a constant increase in homes in pending in Pierce County for the first three months. Pierce County had significant decrease on June and August. 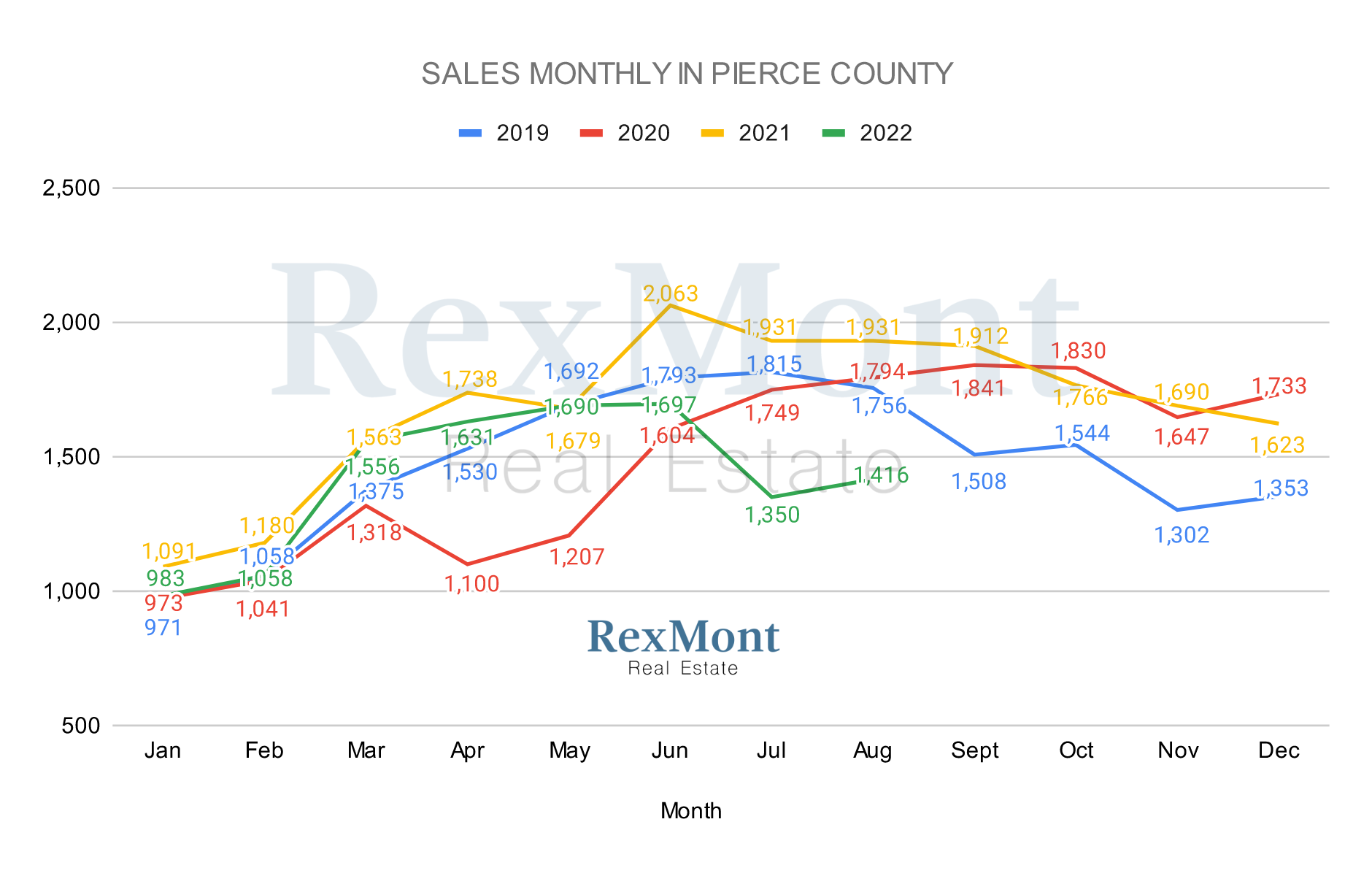 The graph illustrates the number of homes sold per month. At the beginning of the year, sales numbers in Pierce County were trending upwards from January up to June. However, they have started to trend downwards on July and are expected to continue in that direction as increased mortgage rates will continue to impact buyer affordabilty. But it gradually increased this month of August. 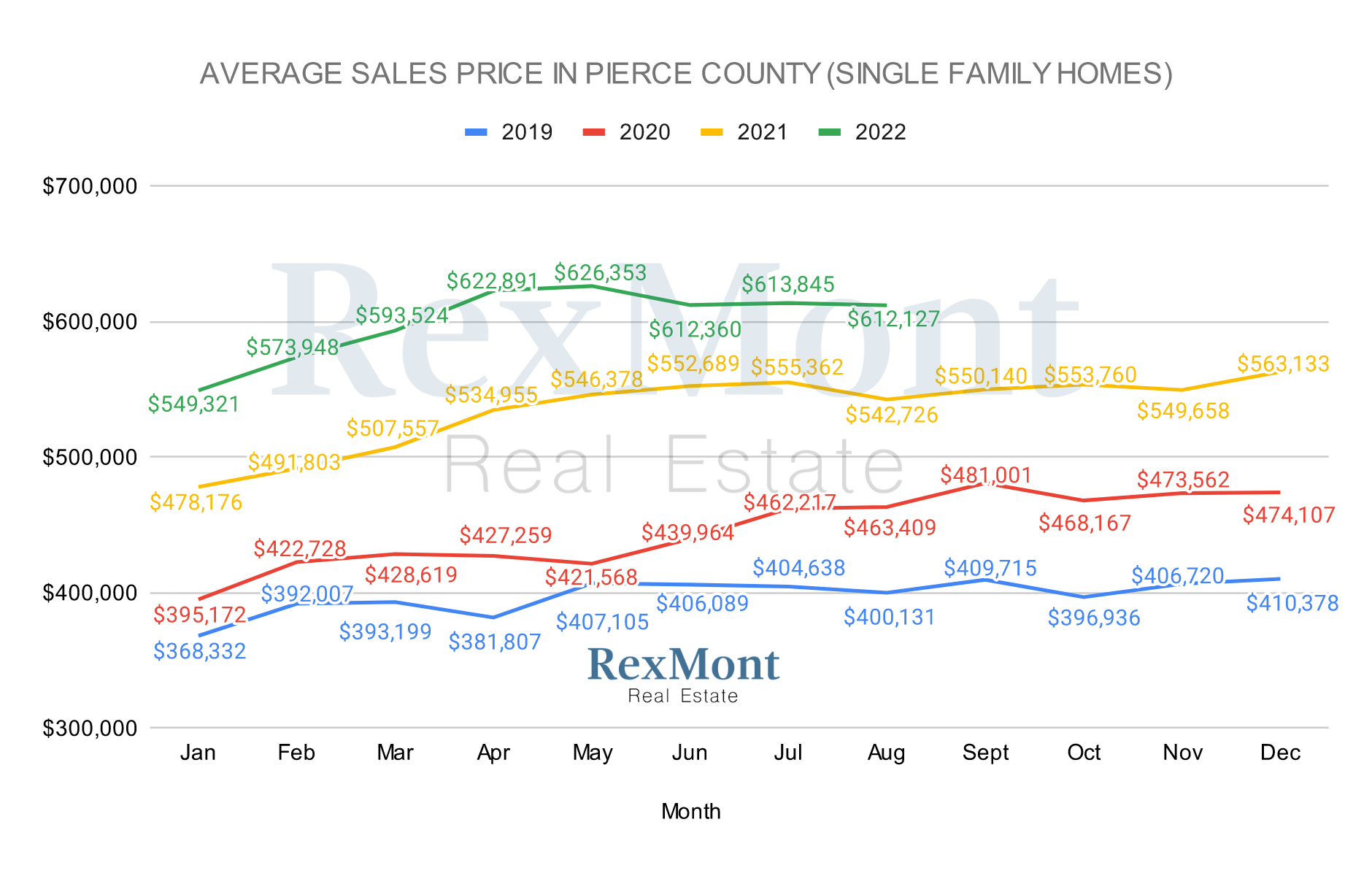 The graph shows that Pierce County is trending upwards and reached the highest sales price on May 2022. However, sales price started going down on June, but gradualy changes on the recent months which is July-August. 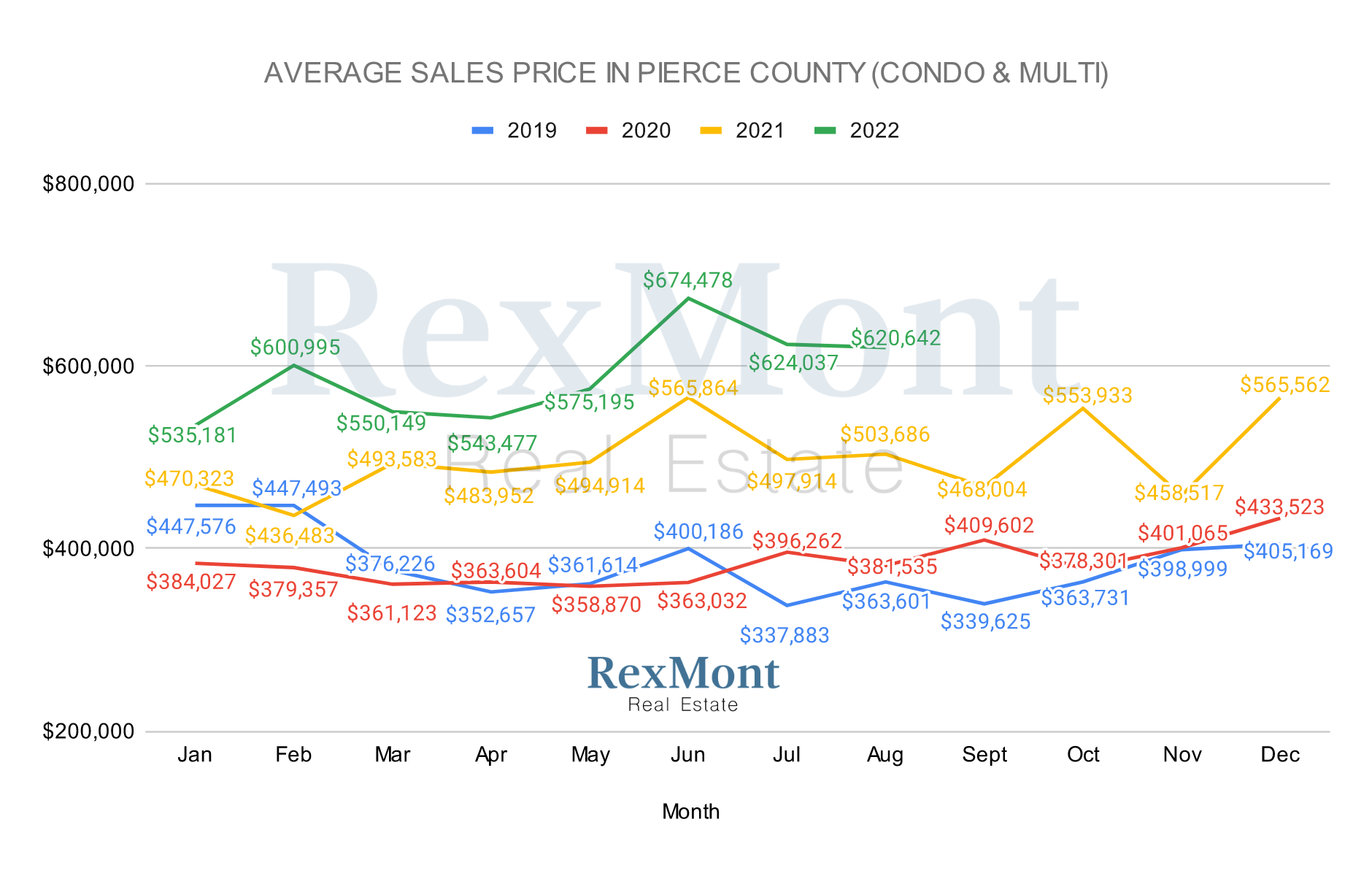 Looking at the graphs, we can see that Pierce County started going up on the second month, but went down on March until April. It constantly went up again on May until June. However, it started going down again on the recent months which is July-August.

This chart depicts prices from January 2022 to August 2022

For informational purposes only. Always consult with a licensed real estate professional before proceeding with any real estate transaction.